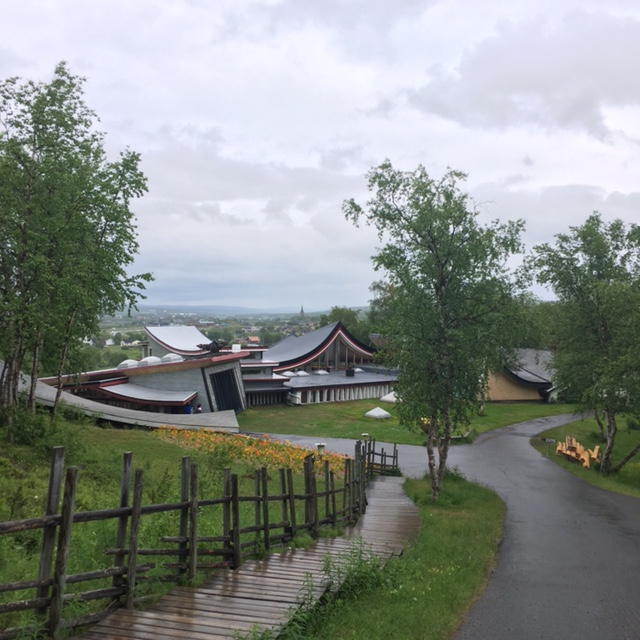 We spent a few days in Kautokeino and in Karasjok, two small Sami towns.

I´ve visited Kautokeino before to go to a conference at the Sami university college (http://samas.no). It´s not a very big place, and in July when all the reindeer and their herders are out at the coast for the summer grazing season, it is fairly deserted. An essential visit for Kautokeino is the Juhl´s silver gallery, as much an architectural and artistic as a shopping experience.

We also stopped by the church in Kautokeino. This was where the uprising against the Norwegian state happened in 1852, as mentioned in the previous post.

In the museums at Kautokeino and Karasjok, we saw many traditional Sami costumes and head-dresses. When Læstadianism became popular, converts were not allowed to dress in such ornate clothing. At one point the women on Kautokeino gathered to throw their traditional headdress into a pond near the church, as a symbol of them giving up the old ways.

We also drove up the valley towards Alta to stop at the small Sami village of Masi/Máze. Máze became well-known as the government planned to flood it in creating a huge dam on the Alta river in the late 1970s. The plan was that damming the river would create hydroelectric power. Huge resistance was mounted against the plans. Although the dam was eventually built, Máze was not flooded. The Alta Controversy, as it became known, was a key event in the raising of political awareness of Sami affairs in Norway, which led to the foundation of the Sami parliament in Karasjok in 1989. 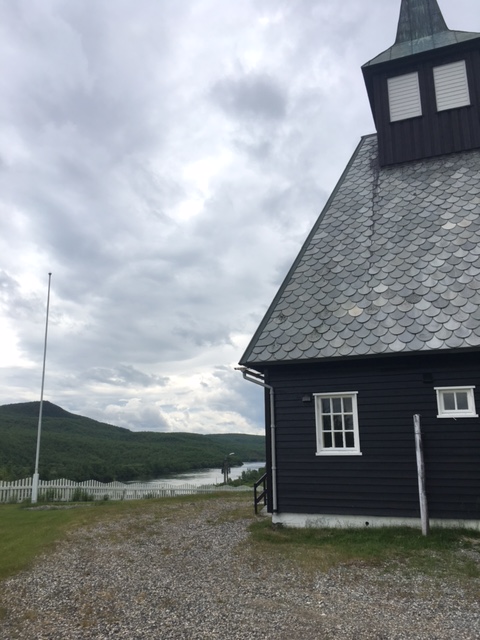 The original plan for the dam would have led to Máze being flooded to 2m above the church tower. You can see the river in the background.

In Karasjok, we visited Sami Parliament. The parliament meets four times a year to discuss issues of relevance to the Sami. Thirty-nine representatives from 7 areas meet to discuss in the plenary hall.  Its main role is in holding consultation meetings with the Norwegian government to protect Sami interests. Norway has signed ILO-169, a legally binding agreement to protect and respect indigenous people´s rights (for more information on ILO-169, see http://www.indigene.de/44.html).

The Sami plenary hall is designed in the shape of a lavvo (Sami tent). The whole building is filled with contemporary art works. 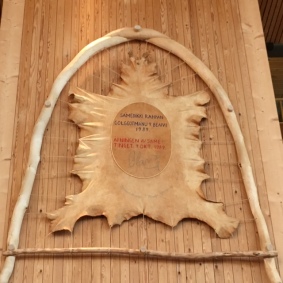 The painting on the left (La elva leve!, Rolf Goven, 1980), symbolizes the struggle against the Norwegian government to stop the damming of the Alta river. In the painting, the dam is the Norwegian parliament building (Stortinget). “La elva leve” means “Let the the river live”.

Plenary hall at the Sami parliament from the outside.

Inside the plenary hall.