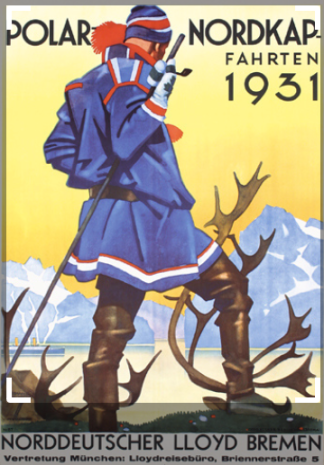 (The posters above show how the Sami were portrayed in the media in earlier times. On the left is a German travel agent’s poster, on the right is an advertisement for a film about a Sami woman, Sami Laila, made in 1929)

Many Sami people from all backgrounds have a close relationship to the natural world. From the inland districts of the north and as far south as Røros, reindeer herding is the most common traditional Sami way of life. To many people, reindeer herding is synonymous with being Sami. Often, the media have portrayed the Sami as wearing the traditional outfits of inner Finnmark and herding reindeer.

The reality of the situation is a good deal more complex. Fishing is also an important traditional Sami way of life. The Sea Sami, living along the coast of northern Norway, are experienced fishermen. Further south, the Sami are farmers, in much the same way as the ethnically Norwegian population. Also in inland areas, fishing in rivers is an important means of gathering food, as is collecting berries, mushrooms and other edible plants.

Below, you can read about reindeer herding. Other articles on this site will cover the Sea Sami and other traditional ways of life.

Siida is a Sami word referring to the reindeer communities in which the Sami work. The siida can include people who are related to each other, but it can also include different families who agree to work together for a season.

Siida are arranged for economic reasons. Reindeer herding is hard work that requires many people. It is impossible for one person or a small family to manage all on their own. Traditionally, in the winter, the Sami formed siida that would take care of the reindeer when gathered in larger flocks inland. Then in the spring, when the reindeer were migrating to the coast, the winter siida were dissolved, and the Sami families joined with others to form summer siida, who worked together until the autumn. 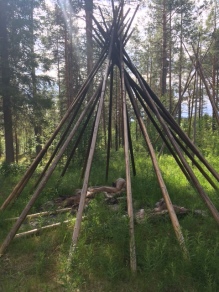 In the video below, you can see members of the siida working together to give the calves earmarkings:

All reindeer in Norway have been domesticated, which means that they all have an owner and are part of a herd. In the winter, the reindeer are gathered in inland areas, such as around the Sami towns of Kautokeino and Karasjok. The reindeer can dig through snow of up to 3 meters to find moss during the winter months. These days, they are often also given supplementary food pellets by their owners.

You can see reindeer herders in Northern Norway moving their reindeer in the video below:

In the spring of 2017, the Norwegian state TV channel, NRK, followed a flock migrating to the coast (you can find out more about the here).

When the reindeer reach the coast, they swim across the the islands, or are taken across in boats if the sea is too rough. The reindeer spend the summer on the islands or along the coast grazing. At this time of year, reindeer from the different herds can mingle freely.

The video below shows a reindeer flock being separated. The reindeer are brought into the area in the middle. As they run around, they are divided and sent into the pens belonging to their owner.

Reindeer herding is a traditional way of life that many Sami still want to live. However, in the modern world, there are a number of challenges they face. Have a look at the young reindeer herders here talking about the problems.

For more about reindeer herding in Norway, look at:

The site also gives information about reindeer herders all over the world: 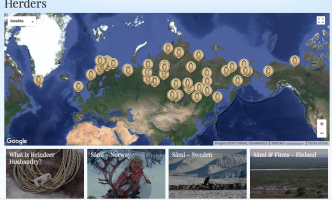