If you don´t know much about the Sami as yet, you may want to start here. 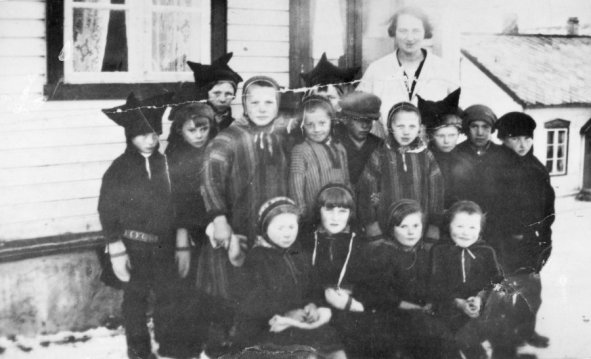 Sami pupils dressed in traditional costumes outside their school in Kolvik, Finnmark, Norway in 1929

The text below is taken from an article by Henry Minde, Professor of History at Tromsø University. It has been shortened and simplified for use in schools. The full text can be found here: http://ir.lib.uwo.ca/cgi/viewcontent.cgi?article=1248&context=aprci

As this text is quite long and may be more academic in style than pupils are used to, there will be comprehension questions after each section. At the end there will be discussion questions for the whole text. Quotations from the article with first hand experiences of schooling have been added as a separate page.

Assimilation of the Sami – Implementation and Consequences

The policy conducted in respect of the Sami minority in Norway was for a long time  a policy of assimilation or fornorsking,  which can be translated as “norwegianization”. The policy of norwegianization stretched from about 1850 up to roughly 1980. The beginning and the end of the period can be linked to two events: The first event was the establishment of Finnefondet [the Lapp fund] in 1851. This was a special item in the national budget established by the parliament to bring about a change of language and culture. The other was the Alta controversy of 1979-81, which became a symbol of the Sami fight against cultural discrimination and for political autonomy and material rights.

It is necessary to see the assimilation of the Sami in a comparative perspective, especially in comparison with the Kven people (an ethnic Finnish minority group in Norway). Both in Norway and Sweden, the Sami and the Kven appeared during this period as distinct peoples who lived in such concentrated communities that their existence was considered a problem which called for a special national policy.

The long policy of norwegianization can be subdivided into several phases:

The Norwegian state gained its constitution in 1814. After this, the first generation of senior civil servants who made contact with the Sami, put the Sami language on an equal footing with Norwegian. In accordance with the humanistic and romantic ideas of that period, it was believed that to speak one’s native tongue was a human right. The most prominent spokesman for these ideas was the clergyman N.V. Stockfleth, who translated and published several books in Sami for use in school and church. Stockfleth received strong support from the senior civil servants’ party in the Storting (Norwegian parliament) and from the government. However, this language policy was opposed by the Norwegian upper class of Finnmark, especially when Stockfleth placed the Sami and the Kven on an equal footing in terms of cultural policy. In 1848 and in subsequent sessions of the Storting, Stockfleth’s language policy was vehemently debated. The discussion heralded a tougher stance by the authorities in respect to the northern minorities.

The measures applied in the first phase were to focus on the Sami in transitional districts. In 1851 the Storting created a special item in the national budget, termed Finnefondet [the Lapp Fund], to promote the teaching of Norwegian in the transitional districts and to ensure the enlightenment of the Sami people.

From the late 1860s the Storting began to tighten the norwegianization measures. The measures already taken had not had the desired effect. Quite the contrary, the Norwegian language was in decline among Sami and Kven. While these measures in the first phase had been motivated by civilizing and nationalistic considerations, now security policy was highlighted, especially regarding the perceived threat from Finland. It was against this background that the Storting in 1868 decided that the money of Finnefondet was to be spent on measures aimed also at the Kven population.

These measures were gradually tightened. One central instrument was an instruction issued in 1880 to teachers in the transitional districts. The instruction stated that all Sami and Kven children were to learn to speak, read and write Norwegian, while all previous clauses saying that the children were to learn their native tongue were repealed. Teachers who were unable to demonstrate good results in this “change of language” process, as it was called, were not given a wage increase.

The final and most long-lived school instruction was issued in 1898, and was nicknamed “The Wexelsen Decree”, after the Minister for Church Affairs. Again, in the justification for the instruction it was pointed to the threat from the east, and again there were reports of the deteriorating language situation. It was now stated that the use of the Sami and Kven languages must be limited to what was strictly necessary. The instruction even required teachers to check that their Sami and Kven pupils did not use their native tongue during breaks.

Financial allocations for the norwegianization measures increased substantially in the early 20th century. The reasons for this were both a greater fear of invasion from the east and the unrest surrounding the dissolution of the union between Norway and Sweden in 1905. New measures were introduced over a short period of time:

8. What was the Wexelsen Decree?

9. What new measures were introduced?

The Versailles Peace Treaty after the First World War changed the borders in northern Scandinavia. For Norway this resulted in a common border with both Russia and Finland. The security threat perceived by Norwegian authorities became stronger after the Russian revolution, but after a short period it was still Finland who was seen as the greatest threat. The inter-war years were marked by a shielding off from Finland and an “inner offensive” against Kven and Sami.

Allocations for the Finnefondet had been considerably increased in the early 20th century and were more than doubled in the years before the outbreak of war in 1914. The great increase was intended to cover the government’s boarding schools initiative, as a new and more efficient tool in the assimilation efforts. At first the boarding schools were built as border fortifications in Kven-dominated areas, but later other areas were included in the programme.

Christian Brygfjeld was Director of Schools and the state’s chief inspector of norwegianisation measures from 1923 to 1935. He was both stubborn and rigorous in his practice. He rejected all demands made by the Sami, partly from racial points of view:

«The Lapps have had neither the ability nor the will to use their language as written language. (…) The few individuals who are left of the original Lappish tribe are now so degenerated that there is little hope of any change for the better for them. They are hopeless and belong to Finnmark’s most backward and wretched population, and provide the biggest contingent from these areas to our lunatic asylums and schools for the mentally retarded.»

According to Brygfjeld the assimilation of the Sami was a civilizing task for the Norwegian state, because of Norwegians’ racial superiority. Here he distinguished between Sami and Kven, as he considered the latter to be a cultured people, the “most industrious and competent” in Finnmark. The fact that the Kven must be norwegianized was due exclusively to security policy considerations.

Formally speaking, the instruction of 1898, the Wexelsen decree, remained in force until the Sami Commission’s recommendation was debated in the Storting in 1963. However, it seems likely that active norwegianization was carried on during and outside school hours up to the late 1960s, even after the Storting had finally buried the Wexelsen decree. A teacher, originally from Oslo, described the situation during the period:

«Then we had to make sure the children never spoke Sami or Finnish, we had been told by the headmaster that they were not allowed to speak their native language, not even during breaks or after school hours. Norwegian was to be spoken, and no discussion about it.»

10. What formed the norwegianization process in the first decades of the 20th century?

11. Why were boarding schools built?

12. What attitudes towards Sami people are shown by Brygfjeld?

13. How did his attitude differ towards Kven?

Effects on the Sami population and cultural pain

The Norwegian state’s efforts to make the Sami (and the Kven) drop their language, change the basic values of their culture and change their national identity, have been extensive, long-lasting and determined. The restructuring of social institutions must have had profound consequences for the individuals’ relations with each other.

Yet, social unrest was remarkably weak during the entire modernisation and norwegianization period. There is consensus that this was due to the powerlessness caused by the extremely unequal power relations between state administration and the individuals who were subjected to the changes.

The norwegianisation policy was presented by the authorities as being for the good of the people. It was assumed that the Sami and Kven themselves did not know any better. Given the image which civil servants had of the minorities, there was no reason to invite Sami and Kven to a dialogue and co-influence in the process. What was needed was paternalistic protection. Even if the motivation behind the methods could be construed as social welfare, these methods were implemented through one-way communication and coercion.

We know from other research that this form of powerlessness which the minorities experienced during norwegianisation has social-psychological consequences. On the one hand, various defence mechanisms are activated to adapt to the social pressure and the new conditions. But if the pressure from the surroundings becomes sufficiently strong and persistent, it will affect self-image, undermine self-respect and self-esteem, and at worst cause self-contempt and an exaggerated critical attitude towards other members of the same ethnic group .

The first big language debate about the native language among the Sami was in a newspaper in the years 1905-06. A Sami-language teacher from Finnmark wrote an article under the pseudonym «a thinker». The article could have been written as an application for a wage increase from Finnefondet: Without learning the main language of a country one could not get very far. What little progress had been made in the country was due to Norwegians. The Sami were incapable of making a better future for themselves. Only when the next generation of the Sami had become norwegianized would the Sami peoples see progress. It was not the first and only time that such opinions were voiced among Samis. The Sami writer Matti Aikio received public attention when he stated in a national newspaper in 1919, “Modern life is getting closer and closer, and it does not speak Lappish”.

While norwegianization among those who belonged to the Sami movement must often have caused bitterness and opposition, the reaction among the «loyal Norwegian subjects» of Sami descent was often one of shame, either on behalf of one’s ancestors and fellow tribesmen who still spoke the native tongue or on behalf of themselves, if the person was unable to learn Norwegian well enough.

To read about some Sami people´s experiences of school, look here.

To read about Sami history and identity after 1945, look here.

15. Why was there so little resistance to the norwegianization policy?

16. What attitudes were there towards the norwegianization of the Sami and Kven?

17. How did Sami react to the norwegianization policy? Were they all against it?

A. After reading the full article, write a text discussing these points:
B.  Reread the quotation from Brygfjeld. Discuss:

C. Similarities can be seen between the treatment of the Sami under the norwegianization process and that of other indigenous peoples. What do you know about how other indigenous peoples were treated by their governments? Find out more about these people and make a presentation about them in class. You can use points similar to those found in task A to structure your presentation.