If you don´t know much about the Sami as yet, you may want to start here.

Before reading more about three important aspects and events in Sami history below, look at this video about Sami history post- WW2:

This video covers the period from World War Two to the modern day. It is made by the Gáldu Resource Centre for the Rights of Indigenous Peoples. Gáldu aims to increase general knowledge about and understanding of Sami and and indigenous rights.

Northern Norway was destroyed at the end of the Second World War due to the German Burnt Earth tactic as they retreated. Houses and villages were reduced to rubble. Along with losing their homes, people also lost cultural objects, photographs and other items that were important to help people remember and maintain contact with their ancestors and their heritage.

The two photos below (taken at Tromsø Museum) show the ethnic identity of people in one area of Troms. In 1930, you can see how many households identified themselves as Norwegian, Sami or Kven (Kven is a Finnish ethnic minority group in Norway).

Twenty years later, you can see that most households now identify themselves as Norwegian.

1. The population hadn’t changed drastically during this period, so why might people identify differently in 1950?  Can it be linked to the Norwegianization process, or could it also linked to the destruction after WW2?

2. How is ethnic identity formed? Start off by making a list of elements that you think are important in creating an ethnic identity. Write down as many points as you can think of. Then remove each of these points, one by one, from the list while discussing the questions below.

–   At what point do you think people start losing contact with their ethnicity?

–  Is it possible to maintain a connection to an ethnicity without any of these points?

In 1978, the Norwegian Water Resources and Energy Directorate (NVE) published plans to construct a dam and hydroelectric power plant along the Alta river that would create an artificial lake and flood a Sami village. This sparked a major conflict between the Sami and environmental activists, and the developers.

A popular movement against development of the Alta-Kautokeino waterway (called “Folkeaksjonen mot utbygging av Alta-Kautokeinovassdraget”) was founded, which first organized opposition and then resistance to construction work.

In the autumn of 1979, as construction was ready to start, protesters performed  acts of civil disobedience: at the construction site itself at Stilla, activists sat down on the ground and blocked the machines, and at the same time, Sami activists began a hunger strike outside the Norwegian parliament.

The prime minister at the time, Odvar Nordli, pre-empted  escalation by promising a review of the parliament’s decision, but the Norwegian parliament subsequently confirmed its decision to dam the river. More than one thousand protesters chained themselves to the site when the work started again in January 1981. The police responded with large forces; at one point 10% of all Norwegian police officers were stationed in Alta (during which time they were quartered in a cruise ship). The protesters were forcibly removed by police.

For the first time since World War II, Norwegians were arrested and charged with violating laws against rioting. The central organizations for the Sami people discontinued all cooperation with the Norwegian government. Two Sami women even travelled to Rome to petition the Pope.

3. Compare the the Alta controversy with other protests that indigenous people are involved in, such as these environmental conflicts.

What similarities are there in these conflicts? Consider the attitudes and behaviour of the indigenous protestors, and those of the police and governmental agencies involved in the conflict.

The Sami Parliament in Kautokeino (Guovdageaidnu in Sami) was founded in 1989. The parliament works with political issues it considers relevant or of interest to the Sami people. It has responsibility for

The cartoons shown below are drawn by the artist Arvid Sveen, who made a number of well-known political posters on Sami issues in the 1970s and the 1980s. 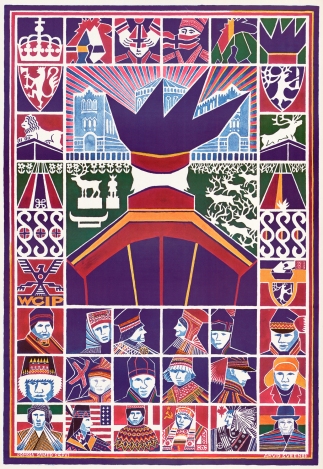 4. What is the message of each of these poster?

5. How effective do you think they are in getting these messages across? Which ways of knowing do you think posters like these two appeal to?

6. What role do posters such as these play in political or social campaigns?

7. Are posters still as relevant in the modern day as they were in the 1970s and 1980s, or have posters been replaced by other forms of media?

Find other posters used by other indigenous groups in conflicts they are involved in (such as the one in this article). Compare the posters to this one. What similarities and differences are there? Which poster do you think is most effective and why?