In Norway, it is compulsory for municipal administrative buildings to fly the Norwegian flag and also the Sami flag if they choose to, on 6th February. Some larger places also arrange festivities in the week around Sami National Day, especially Oslo and in towns and cities in the north of the country. 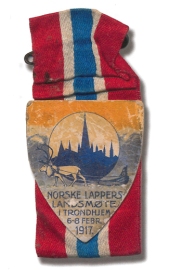 A pin worn by participants at the first congress

In 2017, there were 100 year celebrations of the first congress in Trondheim (Tråante is Trondheim in the South Sami language):

The Sami flag is the flag of the Sami people of the Nordic regions and Kola peninsula. The flag is also sometimes used to represent the territory of  Sapmi (the traditional area of Sami habitation).

The first, unofficial Sami flag was designed by Sami artist Synnøve Persen in 1977. It was used as a national symbol in the demonstrations against the planned Alta Dam.  The colours (blue, red and yellow) are commonly used on gáktis – traditional Sami clothing (for more information about gáktis, look at http://folkcostume.blogspot.no/2013/05/overview-of-saami-costume.html).

The first official Sami flag was recognized and inaugurated on 15 August 1986. This design was by the Coast Sami artist Astrid Båhl. The basic structure of Persen’s unofficial flag was retained, but the colour green was added – a colour which is popular in many South Sami gáktis. Båhl also added a motif which derived from a sun/moon symbol appearing on many noaidis‘ drums.

Sameblod (Sami Blood) was released in 2016 to great critical acclaim. The story follows a young Sami woman in Sweden in the 1930s. The film tells the story of many young Sami women at that time – sent to boarding school, restricted by ideas of racial biology and paternalistic attitudes in Swedish society.

Other materials on the Sami